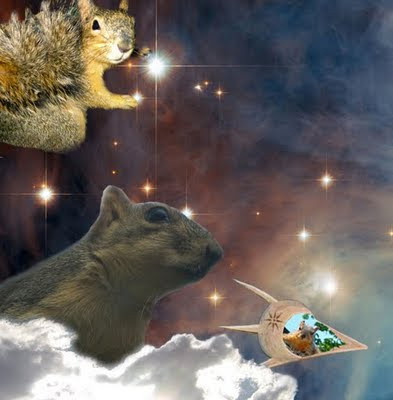 Almost at 2012.... the time of the Great Unravelling, prophesied by the Star Council of Medicine Squirrels of old!!!

What an amazing time to be on planet Earth! The little squirrels all over the universe have been waiting for approximately 26,000 years for the miracle that is about to happen! The truth is about to be discovered by all of humanity! It's what the squirrels have been trying to communicate for as long as they've lived on this planet!

You have never left paradise!

Back in the beginning when Adam and Eve were sitting in the garden of Eden, you remember that the snake told Eve about the magic Apple and that if she took a bite, she would know all about "good" and "evil". No one told you about the squirrel sitting in that same tree that kept telling her "NO! Don't do it! There is no such division into parts! It's all ONE! Don't believe what the snake is telling you!" 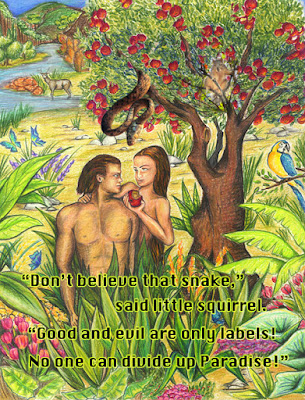 What the little squirrels say is this: "Tap into squirreluminosity!" Why do you think that there are so many squirrels on the planet right now? It's so that everyone has a chance to make a heart connection to a little squirrel and tap into the ever present squirrelspaciousness that was, is, and will always pervade everything because it DOES! God is Reality is SquirrelSpaciousness is Love.... the stuff that includes everything and saturates everything! There is absolutely no place in the universe where there is not squirreluminosity! Even in the far reaches of our galaxy! No matter where you go, there you are: squirrelspaciousness!

The thing is that it has never not pervaded everything.... Since Adam and Eve, humans have learned to divide up the Oneness into various parts! And lo and behold we almost completely lost the ability to perceive Oneness as we did in the beginning! Throughout history, there have been a few clever ones that figured it out and tried to tell us... Jesus, Buddha, Avalokitswara. And today we are so fortunate to have many enlightened beings: Ammabhagavan, Byron Katie, Candice O'Denver, Eckhart Tolle, Jeff Foster, and Stuart Mooney to name a few! But that doesn't count the millions of squirrels who are faithfully holding the grid of Oneness in the morphogenic field! Thank goodness for their perseverance! 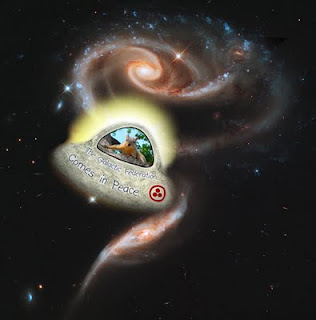 So now is the time to re-enter the Garden! Those with eyes shall see and those with ears shall hear this message! Remember the squirreluminosity that you are! Soothe your weary heart... just rest in a squirrel moment! Decide you can do it! Nothing can prevent you from awakening but believing in the lie of duality! Listen to the squirrels... they've never left the Garden! 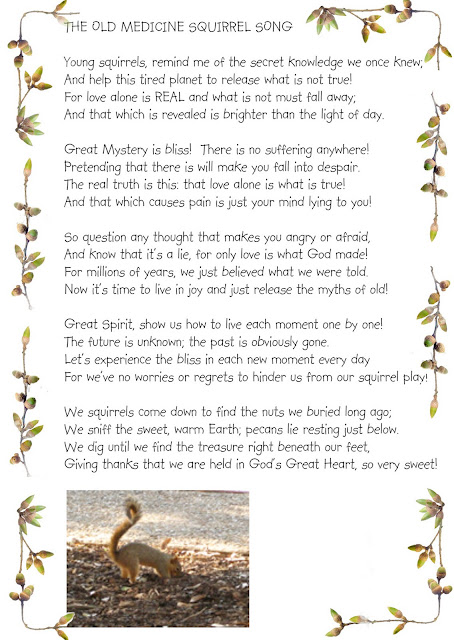 Posted by Squirrel Lady of Town Lake at 12:25 PM No comments: 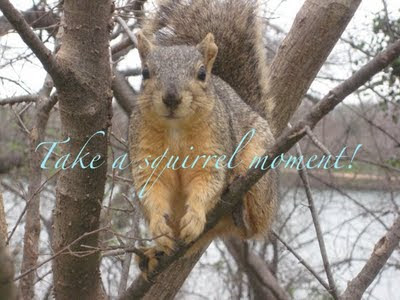 Take short squirrel moments many times until they become continuous!

What is a squirrel moment? It is a happening! It is a moment of experiencing pure squirrel spaciousness and can happen in various ways. One way is to gaze into the eyes of a little squirrel and lose all sense of a separate self! Another way is to hand feed a pecan to a squirrel at the park. When the little sweet heart touches your hand with his paw, you feel the awesomeness of squirrelove!

What good is it to get all tangled up in the thoughts that float on by? Become like a squirrel... his mind is free and without concern. One of the simplest ways to get free of the mind is to take a "squirrel moment". Check it out. You can be all freaked out about a mortgage payment, a friend's diagnosis of cancer, or sundry other thoughts, ideas, and emotions. If you keep on focusing on it, you only feel worse and worse. Why not just take a squirrel moment?

Be like a squirrel... stop thinking! Now, who are you without that thought? You are pure squirreluminosity! You are that spaciousness that includes everything! Let the little squirrels show you the way! 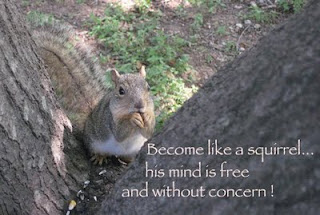 Notice that squirrel spaciousness is in no way affected by any of your worries or concerns.
In fact, SQUIRREL SPACIOUSNESS CONTAINS IT ALL!!!

I will give a real life example. Several years ago, I met a little squirrel who had bloody tumors all over her body. It was hard for me to look at her with all the stories going on in my head! I named her "Floppity" because she had a tumor hanging on each ear. Every day I met her at the same tree and gave her pecans and Reiki energy. I would always tell her, "Floppity, you are a perfect squirrel!" Never once did this little squirrel worry about her condition. She just lived happily in the body she was given. She would just show up, eat the nuts I offered, and received the Reiki.

A miracle happened! In 2 months time, all her tumors had dried up and fell off! Then her hair grew in where the tumors had been and she was indeed healed! The important thing to note about squirrels is that they don't sit around and worry or feel sorry for themselves! Floppity would have continued to live a happy life with or without those growths. That's because she lived her life in SQUIRREL SPACIOUSNESS! And that is a comfortable and vibrant space of well being and ease!!

I can't help but think that she healed faster because whe was free of concern for her own healing! She was totally living in squirrel spaciousness and not troubled about her body. That frees up an incredible amount of energy to heal! See below the beautiful photo of Floppity still healthy and vibrant several years after this squirrel miracle! 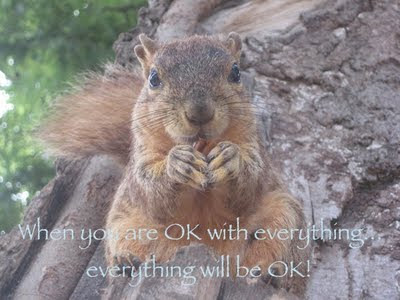 Try it out! Next time you're weighted down with concerns of any kind, take a "squirrel moment" and BE FREE!
Posted by Squirrel Lady of Town Lake at 10:12 AM 1 comment:

What Is Squirrel Bhakti?

TRULY THE FASTEST PATH TO ENLIGHTENMENT! 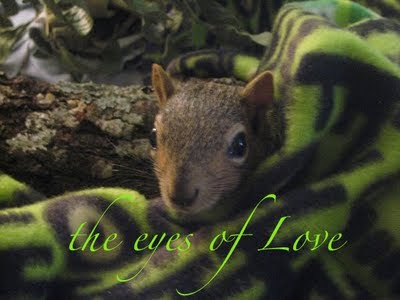 An amazing discovery I have made is that there is a little known path that is really a subset of the Bhakti path called Squirrel Bhakti. Squirrel Bhakti is the path of devotion to all the little squirrels of the Cosmos. It is actually the fastest means to enlightenment, because in gazing into the eyes of a little squirrel, one can directly taste the expansiveness of squirreluminosity and experience Cosmic Consciousness. How does this work? When you gaze into little squirrel eyes, you will witness a pure heart! Soon the feeling of squirrel innocence will amplify your own sweet innocence! You will float in the sweetness of squirreluminosity that includes the entire Cosmos! 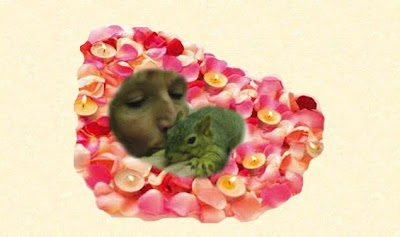 Here is a song that just came through me one day. Thanks to my friend Den Lilla Ekorren for putting the video and background music together.
It is the perfect song for any "Squirrel Bhakta"!

Posted by Squirrel Lady of Town Lake at 9:26 AM No comments: