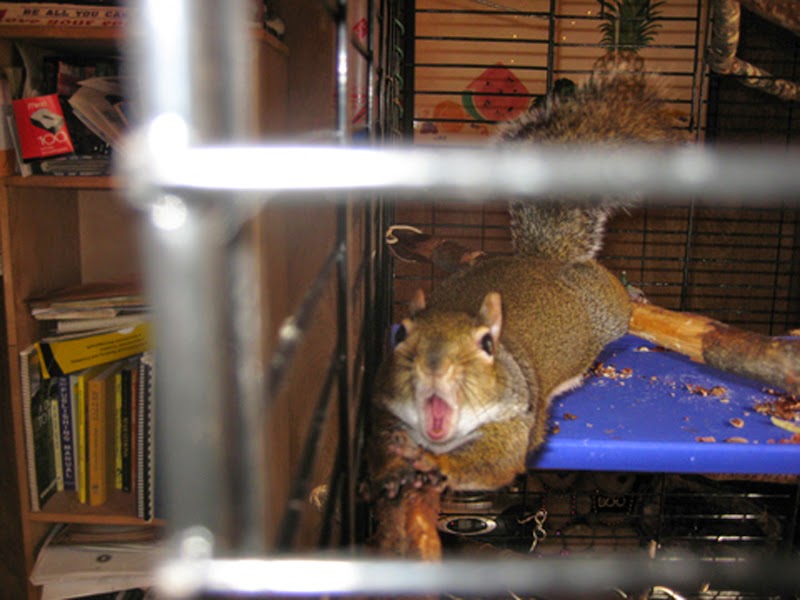 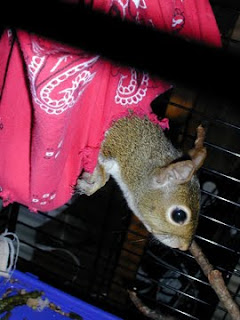 Once upon a time there was a family of grey squirrels living happily in New Orleans. They played together and lived in a cozy nest at the very top of a tall tree. One day a big storm came up. The wind was blowing really hard and the squirrels had a difficult time hiding form the rain and wind. One family had a little baby and they were all huddled together in their nest trying to stay safe and warm. The wind was getting stronger and the rain pelted down like bullets. Just then, the force of the storm threw down their tree and only the little baby grey squirrel was left in the nest. She honkered down and waited, hoping that her family would return safely.

There were sounds of sirens and people were being asked to leave their homes and go to safer places. This storm, which they named Katrina, resulted in a whole bunch of people and animals moving to Austin, Texas.
One young man was living in the apartment next to the tall tree that came down. When he was leaving his home, he saw the fallen tree next to his dwelling. He saw the nest and wondered if there was a bird or squirrel in it.
He reached in with his hand and found a tiny baby grey squirrel all curled up in a furry ball.
"Hi, little one," he said. "I think you'd better come with me. I'm going to visit my sister in Austin, and that would be a safe place for a little squirrel to be. You can ride with me!"
So, off they rode out of New Orleans, leaving the storm behind and a new adventure ahead! The young man had no idea how to take care of a baby squirrel, but he was confident that someone would be willing to help once he got to his sister's house. And in fact, that is exactly what happened. His sister found Clarissa Summers' impressive website on squirrel care and nutrition and called her right away. As Clarissa lives in Houston, she told him to take the little grey to the Squirrelady of Austin and he did.

That was over 4 years ago now, and Earl Grey contentedly lives a life of luxury in 78704. In fact it seems a bit of a coincidence that Earl, the beautiful girl squirrel and Queen of the French Quarter would end up living at the address "2012". Anyone that knows about the Mayan Calendar knows that 2012 is a very significant number! And very few people realize the connection between the Mayans and the grey squirrel!

In Martin Brennan's book, "The Hidden Maya", he relays one of the stories of creation in which a grey squirrel escorted the Sun on its first journey across the sky. The other animals were angered by the light of the Sun in their eyes, but the squirrel welcomed the Sun's light and became known as the Sun's companion. In the beginning of time, the grey squirrel guided the Sun across the sky and built an altar to Him in the West.
The wolves and jaguars became jealous and killed the squirrel. And to this day, the squirrel is considered to be a hero god. In fact, in the Yucatan, you can see the glyph of the squirrel with the sacred emblem of the Sun emblazoned on its head. This entitlement distinguishes squirrels from other animals and even now, the Huichol Indians offer sacrifices to this hero god! (See p.158 in Martin's book)

So it's no wonder that little Earl ended up on the doorstep of 2012! Little did she know that the Squirrelady teaches Mayan astrology and is a Mayan daykeeper. She holds a blessing for Mother Earth every 13 days according to the Mayan Calendar!
This is a free gathering that meets at noon, right in the middle of the Pfleuger bridge (that's where Lamar crosses over Town Lake). For a schedule of blessing days please go to squirrelplanet.org!

The Squirrelady knows very well that the squirrels on the planet are doing a fabulous job of keeping peace and grounding the light of Father Sun into Mother Earth each and every time they bury a nut! They are all little messengers of peace from the Galactic Federation. Stay tuned for more information about the awesome mission of the squirrels on Planet Earth!

If you would like to see an awesome video of Earl Grey with her Valentine's Day gift, just click on the link below!
www.youtube.com/watch?v=3GlWP2al8RA 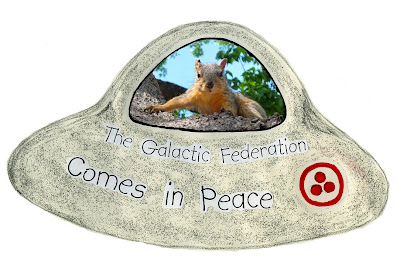 Posted by Squirrel Lady of Town Lake at 4:19 PM No comments: