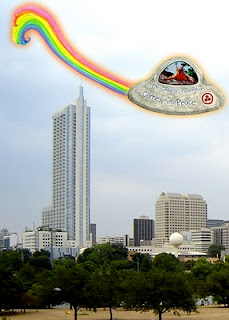 The Galactic Federation Comes in Peace!
Well, my dear beloved earthlings, it's time for the squirrels of our planet and the entire cosmos to take their place in the limelight! It's time for them to come forward for the mission they have held inside their little squirrel hearts for the last 26,000 years! As we quickly approach Dec 21st, 2012, the 13th major Cosmic Transmission for Awakening from the Galactic Federation is about to come upon us this February! A sweet envoy of Squirrel Ambassadors for Peace hover over Jerusalem and then shoot upward out of sight! Watch below!
Read this excerpt from "Squirrel Galactica: The Real Truth Comes Out":

Suddenly, Old Mr. Nutkin stated, “I believe a message is coming through from the Galactic Federation. Would you care to listen to this transmission?”

All the squirrels quieted down in anticipation of a new message.

Mr. Nutkin continued, “It is time for the birthing of a new paradigm on the blue-green planet. On the winter solstice of the year 2012, an astronomical event is to occur. The axis of this planet will shift toward the center of the galaxy and the energy will begin to change. For thousands of years, this planet has carried the old frequencies of struggle and suffering. You could say that the predominant atmosphere has been one of resistance to “what is”. In the next two years we need volunteers to assist this planet in anchoring the Golden Octave of Oneness. In this new paradigm, suffering will become obsolete and war will cease. We need squirrels of all ages to ground this planet with the frequency of Unity Consciousness. As messengers of the Light, we know you are more than capable of anchoring the frequencies of Pure Love and Compassionate Service. We sign off now. In Service to the One Heart, we salute you! KLATU BARADA NIKTO!”

Nutkin’s transmission caused quite a stir among the squirrels. Every one of them wanted to jump in the ships and leave right away. Some even began donning their spacesuits.

“Brother and sister squirrels! Please! Be calm and listen!” cried Pucky. “I am happy that you are all willing to go on this cosmic adventure. However, we will need approximately half of you to remain stationed here inside the Sun. That way each one of you will be connected to a traveler-squirrel. In this way you will act as a conduit for the golden light frequency and this will stabilize the new paradigm." 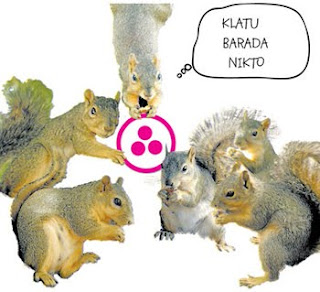 Posted by Squirrel Lady of Town Lake at 1:53 PM No comments:

TO LOVE A SQUIRREL 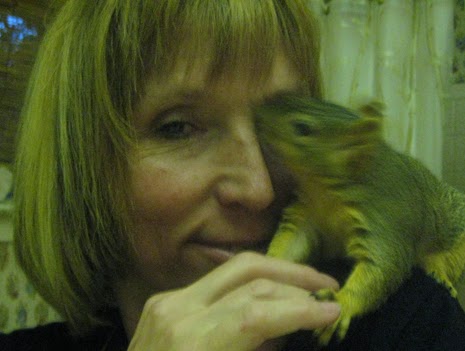 Little Bucky Squirrel... how do I love thee?
Let me count the ways! 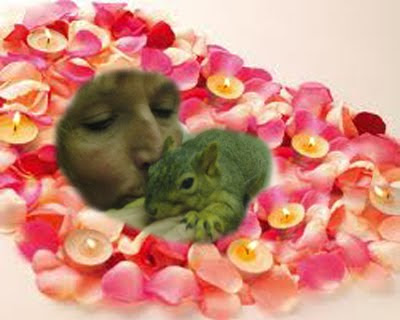 I love thee in the sweet, snug fingerhold you have
as you grasp my hand;

I love thee in your warm, pink tongue
as you lick my hand;

I love thee in your awesome gaze, as you look at me
with those large black all knowing, unconditionally loving eyes;

I love thee in the way you attempt to bury a nut
in my collar at the back of my neck;

I love thee in the nuts you have hidden
in the folds of the couch;

I love thee in the way we squirrel wrestle together
in the mornings;

I love thee in the way you wait, perched upright on the porch of your cage,
ready to jump on me whenever I get close enough to you;

I love thee in the ever-present exuberance you demonstrate
whenever I walk in the room;

I love thee in your sweet innocence
and constant presence in the "now";

Little Bucky, teach me to be like you,
for only then can I truly enter the new paradigm of
Heaven on Earth!

Posted by Squirrel Lady of Town Lake at 5:32 PM No comments: