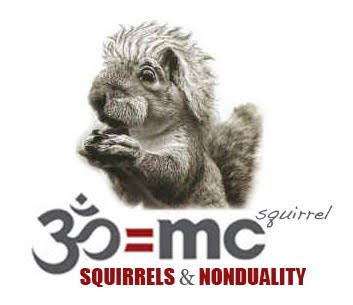 Finally! The time is upon us when human beings all over the globe are simultaneously waking up to the profound truths that the squirrels have known for thousands of years!!! It truly is an exciting time to be on the planet!

I am only writing the words I am receiving via the direct transmission of knowledge from my dear friend and housemate, Sri Buckyji a.k.a. Bucky Squirrel. 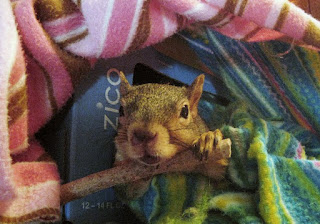 Little by little the truth is being gradually accepted and realized: that the basic space of "Squirreluminosity" is totally pure and includes us all! And we are that! There is no separation! This loving essence of juicy squirrel happiness pervades the entire cosmos. It is, in fact, the very space in which all the phenomena in the entire universe appear and disappear! There is nothing that is not completely saturated with squirrelove!

But don't believe me! Prove it to yourself! The easiest way to really understand this transmission is to go to your neighborhood park and bring some pecans with you. Wait until you see a little squirrel and slowly and quietly walk up to this amazing boddhisatva. In your heart, feel the love and deep respect you have for this creature and for all life. Don't rush... allow yourself the time to experience this loving connection. You will become aware of a sweet warmth that begins to radiate from your heart. Then, with your awareness on your heart, call to the little squirrel lovingly. Tell him you love him and have a nut for him. Soon the little squirrel will come down from the tree and walk over to you. Hold the pecan close to the ground so that s/he can easily reach the nut. Don't be surprised if he puts his little paw momentarily on your hand. 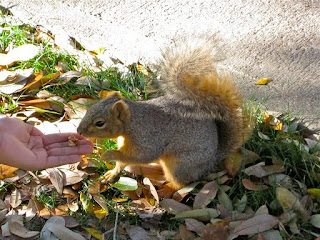 Gaze into his obsidian eyes and receive the gift of squirrelwisdom he shares so generously! Feel the rush of gratitude that washes over you! That spaciousness and presence of love is what the little squirrels have been trying so hard to communicate for thousands of years! And now, right on cue, just about one year away from that magic date, Dec.21st,2012, the quickening is upon us! The squirrels' message is finally being heard! "You are this squirreluminosity! You are this love! You are what you have been searching for all along!"
Posted by Squirrel Lady of Town Lake at 11:07 AM 2 comments: 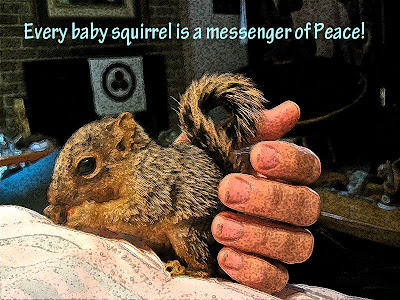 Can you imagine a planet without war?
The little squirrels can!
And that's what baby squirrels
are here to teach! Squirrels
are one of the most ubiquitous
species of mammals on our planet,
living on every continent.
They are working day and night
to deliver this message:

We are all here to be of great benefit to each other and the world! Be kind to all beings! Love and nurture your fellow creatures!

It's time to learn from the enlightened ones
in our midst... the animals!

Just imagine if every person in the world had the experience of raising a baby squirrel! I don't think there is a faster or simpler way to open one's heart! In a short time there would be Peace On Earth! God bless all the little baby squirrels of the entire Cosmos! 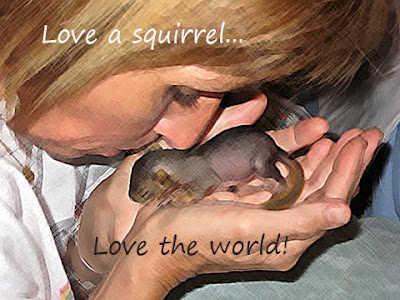 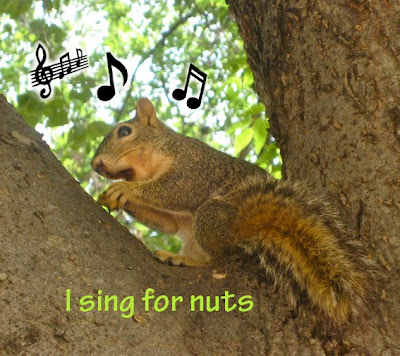 Most people are familiar with the group "Playing For Change" whose music of Oneness is sweeping the planet and inspiring hearts everywhere! Well the squirrels wanted me


to tell you that they now have a group that is winning hearts around the globe and it's called "Singing For Nuts"! 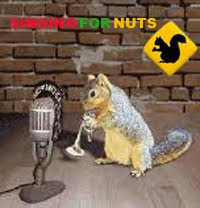 Here is the story of how "Singing For Nuts" came to be. One fine day my bodhisquirrel, Sri Buckyji, shared with me his newest song, "A Peaceful Planet". (verses as follows)

The squirrels... they meet in lively conversation;
They have a mission - to save this planet!

They chatter all about our situation -
Here on this planet; this suffering planet.

They fear the time is near for our extinction,
If they don't help us!

They worry that mankind will never listen
To their squirrel voices!

So... squirrels around the world are marching into
the battlefields - to meet the soldiers.

They're taking all their guns and ammunition
And give them sacks of pecans and walnuts.

They teach them how to nurture one another
and all the creatures;

The soldiers are beginning
To see the folly of hurting others!

And so, indeed the future will be different
Than was expected...

There won't be any reason to be violent
When every being is feeling happy!

And now the world will once again
Return to - a peaceful planet...

The squirrels will have accomplished
Their great mission - to heal the planet!

The squirrels are here to tell you
IT CAN HAPPEN!
A world of joy... where all are happy...

Bucky urged me to contact our friend, the squirrel mystic, Den Lilla Ekorren of Sweden and to please ask him if he would write some music for this song! And guess what? He did! So here below, you have the collaboration of two very fine squirrels - Buckyji and Den Lilla Ekorren... Enjoy and sing along!

Super Squirrel says,
"Join us in our mission!
Bury Nuts, Not Bodies!" 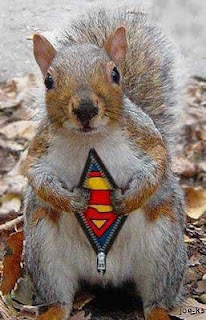 Posted by Squirrel Lady of Town Lake at 1:09 AM 1 comment: 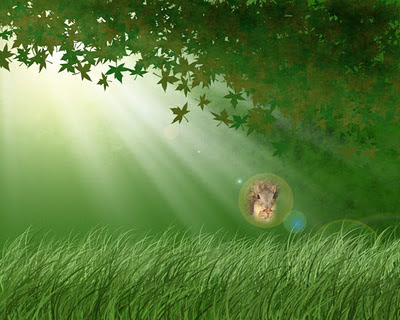 Little Lucky on her way to Earth!
Q: Where do baby squirrels come from?
A: They come down in balls of light
straight from the Sun!
Q: Why do they come this way?
A: They bring the high frequency light of squirrel bliss to help humankind experience their true state of Oneness.
Q: How do you know this?
A: You can see this in the orb photo taken in broad daylight right in front of this mama squirrel. The baby is hovering until mama is ready to give birth! 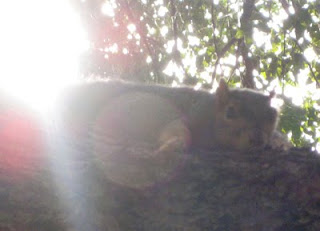 You can see Bucky Squirrel
in the photo below. This is before
he was born. He was still
formulating his mission for
his approaching lifetime! 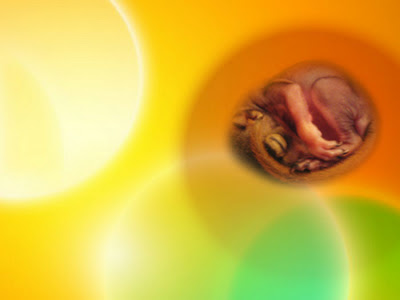 See the squirrel cage
in front of
the Squirrelady's house!
All the baby squirrel orbs
are floating
outside the release cage! 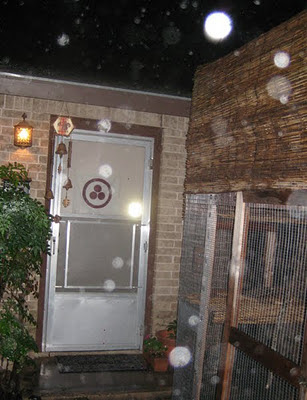 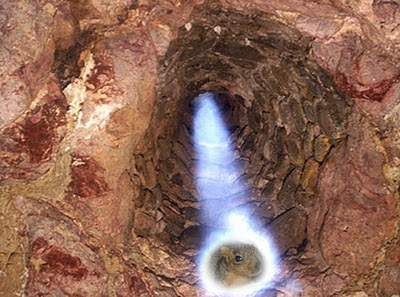 Little Nutjoy on her way to Planet Earth!
Posted by Squirrel Lady of Town Lake at 3:02 PM 2 comments:

What is the "Bucky body"? 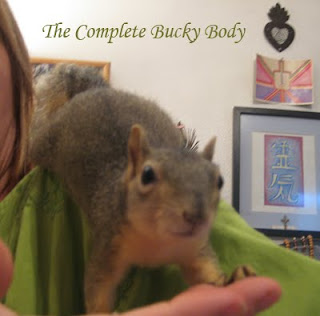 No doubt you are familiar with Eckhart Tolle's term "pain body". Well, I don't mean to rain on ET's parade, but what about the"pleasure body"?
Did you know that in the pinnacle teachings of Buddhism, they talk about the "complete pleasure body"? My little squirrel Bucky told me that is exactly the same as the "Bucky body"! 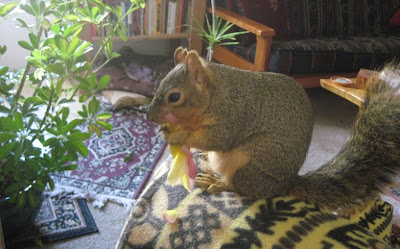 How can it be that the 'Bucky' body is
identical to the pleasure body spoken of
in Buddhist texts? Simply because
juicy squirrel happiness proliferates
unconditionally and at random! Their
perpetual cuteness and limitless
jubilation continually and inexhaustibly
infuses the unified field with
beneficent action for all creatures! 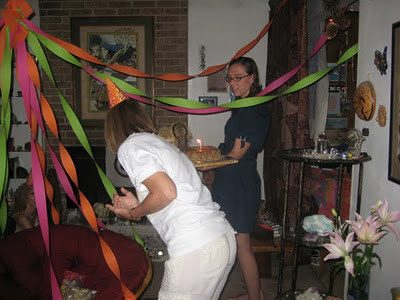 This is the way the great realization of
Oneness is being gradually transmitted
to all beings! The little squirrels are
consistently sending out huge quantities
of squirrelbliss (as they have been doing
for thousands of years) in the hopes that
earthlings will eventually catch on.
Little by little the long awaited shift
is happening! The incredible perseverance
and patience of little squirrels
all over the planet is finally
coming to fruition! 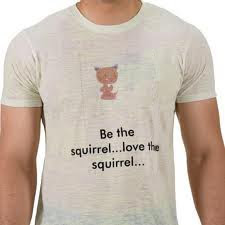 AT LAST!
Posted by Squirrel Lady of Town Lake at 9:27 AM 1 comment:

Squirrels Teach: The Concept of Zero

"Only three cultures arrived at a concept of ZERO independently: the Maya, the Babylonian, and the Hindu of India" states Martin Brennan in The Hidden Maya.

The Mayans seem to have had two types of zero, to go with their two types of writing. The first kind was a fairly staightforward text style that was used for doing computation; that zero is the eye-shaped symbol in the upper left picture above. The second type was the flowery symbolic writing they used for monuments, shown in the bottom row.
~from Zero in History
But how did the Mayans choose that eye-shaped symbol?
Here is what my squirrel Bucky told me yesterday morning:
The old Mayans would often have little squirrels as pets. In searching for a symbol to represent the concept of zero, what better symbol of the transcendent state, the portal to the next dimension, than the sleeping baby squirrel? 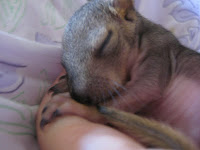 Bucky told me that some old Mayan gazed lovingly at his baby squirrel and saw immediately the perfect representation of "zero". The Mayan concept did not mean "nothing". To the Maya, zero signified both a completion of a cycle and a portal to a higher level in infinite cycles of limitless ages! 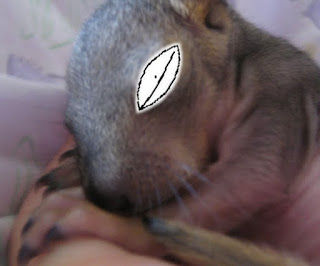 The rapidly approaching date of December 21, 2012 is the end of many cycles of time in the Mayan Calendar. And in the Long Count that day is 13.0.0.0.0. See the chart below found in Wikipedia by searching "Long Count".

On the final page of Jose Arguelle's epic book The Mayan Factor, which he wrote to prepare people for the Harmonic Convergence back in 1987, he states:
"Then it shall be ready. The unique moment, the moment of total planetary synchronization,
13.0.0.0.0 on the beam, will arrive~ the closing out not only of the Great Cycle, but of the evoltionary interim called Homo sapiens. Amidst festive preparation and awesome galactic-solar signs psychically received, the human race, in harmony with the animal and other kingdoms and taking its rightful place in the great electromagnetic sea, will unify as a single circuit. Solar and galactic sound transmissions will inundate the planetary field. At last, Earth will be ready for the emergence into inter-planetary civilization.
Then, as if a switch were being thrown, a great voltage will race through this finally synchronized and integrated circuit called humanity. The Earth itself will be illumined. A current charging both poles will race across the skies, connecting the polar auroras in a single brilliant flash. Like an iridescent rainbow, this circumpolar energy uniting the planetary antipodes will be instantaneously understood as the external projection of the unification of the collective mind of humanity. In that moment of understanding, we shall be collectively projected into an evolutionary domain that is presently inconceivable.
And yet, we shall know. Like infants in a vast new playground, we shall retain the highest and most exalted vision. Purpose will be illumined to new levels of spontaneity. Everywhere shall be heard the Voices of the Galactic Federation: the Elders, the Ancestors, the great Boddhisattvas and Saints, the Maya returned, our deepest Selves, the Cosmic Mirror, the Raiment of Space and Time made One. As one voice, the announcement
shall be made, heard by one ear: And now the adventure begins!
Now, some will say that I have woven a fantasy, a utopian tale that is unrealizable in such short time. But I have only woven from that which the Maya left behind and which the teachings of mind's vastness make accessible to all. According to the prophecies of Shambhala, following the final conquest of the three Lords of Materialism by the spiritual armies released for the closing of the cycle, there will be a 500-year Golden Age. As we ride the final baktun fractal through this dark moment of Faustian denouement to ultimate planetary release from our self-created bondage, let those warrior-shamans among us take heart. For it is through the open portals of the heart that the future returns in all of its radiance.
Humbly presented as a gift to the children, I close with the Mayan code of honor:
In Lake'ch: I am another yourself.
Completed 1 Imix, 12 Zotz, October 6, 1986, the Eastern Year 7 Muluc
Boulder, Colorado, Central Rockies, North America 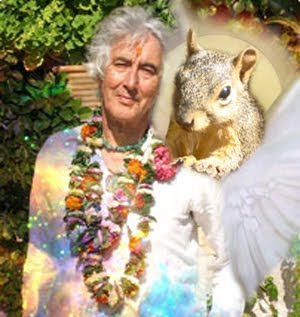 Posted by Squirrel Lady of Town Lake at 9:41 AM 1 comment: