Just hoping that along with the incredible gift of self-inquiry Ramana gave to the world, that we can learn the importance of compassion in caring for our animal brothers and sisters.
Ramona considered them his family and treated them equal to humans! 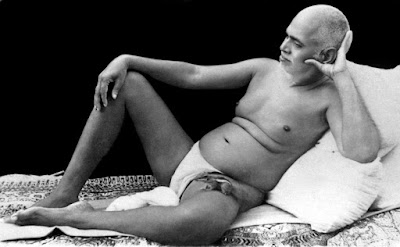 "Later on in life, Ramana began to walk with the aid of a staff. One day, as he was descending the steps into the ashram compound, a squirrel, who was being chased by an ashram dog, ran past his feet.  He called out to the dog and threw his staff between them and in doing so, he slipped and the fall broke his collar bone.  The dog was distracted and the squirrel saved.  Bhagavan did not care for his own safety while protecting the devotee. It may just be a squirrel, but for  Him, the primary concern was to protect His friend the Squirrel.  His own safety was NEVER a concern."

Posted by Squirrel Lady of Town Lake at 1:32 PM No comments: