Bucky Goes To The Dentist 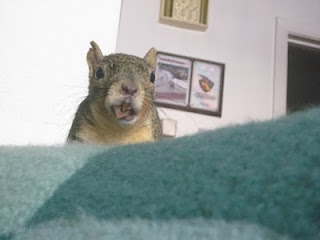 Did you know that little squirrel's teeth keep growing???
It's up to them to grind them down on tree bark and hard nuts. However, sometimes the teeth don't line up properly... that's what is called a malocclusion. Sometimes a squirrel is born with one but mostly it can happen when the squirrel has had a trauma to his face.
It was this past June when the day came to put Bucky outside in the big release cage. There he would get used to the sounds of the neighborhood... dogs barking, birds chirping, cars honking, etc. His brother Pete had been outside in that cage for about a month and finally was on his own. Pete always came back to the outside cage for food. I put little Bucky out one fine morning and to my surprise, he started running around inside the cage right away! Pete had been very cautious and hid in his little box inside the cage for a couple days before he decided to explore this larger environment. He had taken it very slowly. So when I saw Bucky so at ease, I thought "He'll be outside playing with Pete in no time!" I went inside the house and in about 15 minutes or so, I heard a big ruckus outside and squirrels chattering. I ran outside immediately to find Pete and another little squirrel jumping from the release cage to the roof. It seems they were running from a cat that decided to check out the new occupant! The cat had run off too. But little Bucky was chattering and chattering! I said, "Bucky, what are you upset about? you're the one that's safe in the cage!" But he kept on chattering! I opened the door of the cage to see what he was so upset about and to my horror, his little snout was all bloody! My heart just sank...I couldn't imagine what could have happened! I took Bucky inside the house right away and cleaned his face. Poor little guy was so upset. It seems that he had been chewing on the cage and visiting with Pete who was on the outside. Then when the cat came and startled them, Pete took off running and Bucky got his teeth stuck on the wire! In his fright to get away, he pulled his teeth forward and cut his snout! On My! 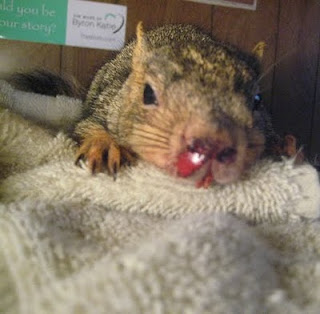 Little Bucky's face was so sore that he couldn't chew anything for awhile. He got his nourishment from banana milkshakes! It took a good while before he could chew, but what was worse, he couldn't grind down his own teeth! That means they kept growing! Soon enough, those teeth would have to be trimmed!

It became harder and harder to chew
pecans and impossible to crack a shell!
So after a lot of research and talking to
other squirrel rehabblers, I got a pair of
jewelry cutter clippers and trimmed his
upper left tooth. That's all he could handle.
Then I had a vet tech hold him so I could
trim the upper right tooth. After that little
adventure, Bucky gave the vet tech a dirty look, as if to say, "I know who you are and I promise you that will not happen again!" 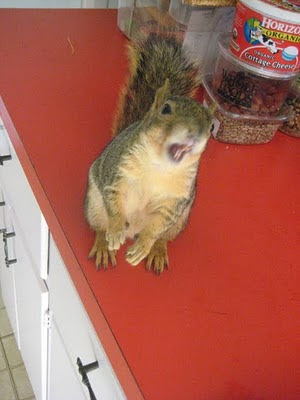 Needless to say, ever since that day, Bucky would not let me or anyone near his teeth. Consequently, they grew and grew and pretty soon he couldn't chew the nuts he loves so much. So I had to make an appointment with a very considerate vet named Dr.Paul. One very early morning, before little Bucky was awake, I put his little squirrel nest box in a cage and covered it with blankets before he could notice. We drove up to Dr.Paul's office and filled out all the papers. Dr.Paul administered some fast acting anasthesia and in less than 15 minutes, Bucky had brand new teefers!!! It was a squirrel miracle!
I brought him home and put his nest box back in his cage. Then after a nap, Bucky emerged from his nest and looked around like he had just awoken from a dream. I said, "Hi Bucky, would you like a nut?" I gave him several pecans and he ate one after another without stopping. He was so happy to be
able to chew again! We were so delighted that Bucky and I played all afternoon, celebrating! Bucky sends a big THANK YOU to Dr.Paul and his staff! 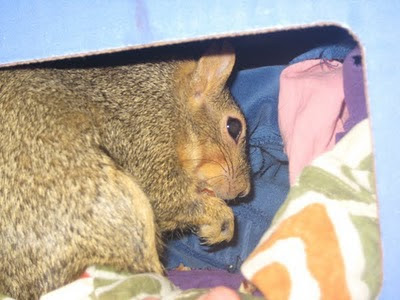 Thank you to Dr. Paul for trimming Bucky's teeth! Here he is enjoying every bite!!!!!

Posted by Squirrel Lady of Town Lake at 5:24 PM 2 comments:

Buddha Had A Squirrel Advisor! 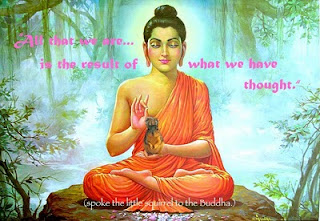 Buddha's Inspiration came from a little squirrel...
People often underestimate the amazing wisdom of our furry tailed ones! Just the other day my little squirrel Bucky told me, "There is no point trying to do anything ahead of its time. The universe won't allow it. If you simply wait, the action will arise on its own and it will be exactly on time!" I love having a squirrel teacher in my home. He told me that is how all the Great Masters got their inspiration. He said little squirrels don't care who gets credit for the idea... they just want the ideas to get out into the morphogenic field. 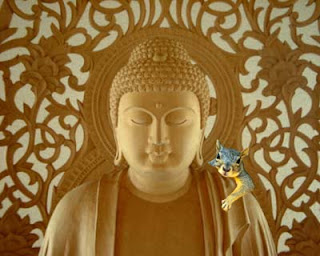 These photos were
all taken during
VERY
important
realizations
in the life of
Buddha!

In this picture, little squirrel is teaching
the Buddha about the Middle Way!


Posted by Squirrel Lady of Town Lake at 3:05 PM 2 comments:

Squirrel Angels Are Watching Over You! Did you know that there are 22 squirrel angels for every human being on the earth? Practically everyone knows that a squirrel's main job is to plant trees. But very few realize that the other important responsibility a squirrel has is to guide and teach human beings the Way of Lovingkindness. You can observe the way mama squirrels take care of their young. They are gentle, yet firm. They exemplify unconditional love and are great teachers. You may also observe that squirrels like to play and even cuddle with each other. They seem to enjoy every moment and for them, there is no difference between work and play. They certainly have mastered the art of enjoying life! 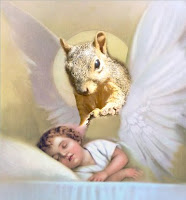 Prayer to the Guardian Angel Squirrel

Squirrel Angel of God, my guardian dear,
To whom God's Love commits me here.
Ever this day, be at my side,
To light and guard, to love and guide. Amen. 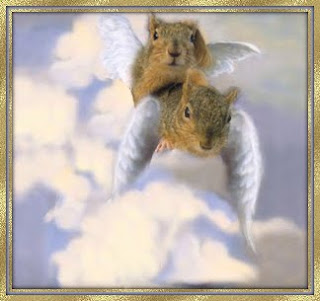 The Universe is conspiring on your behalf !

Posted by Squirrel Lady of Town Lake at 11:22 AM No comments: