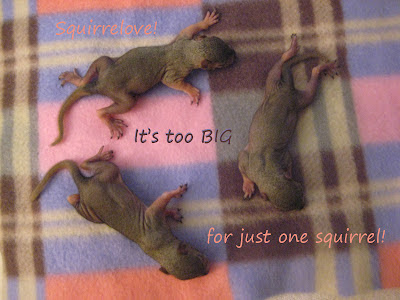 Have you ever wondered why mama squirrels usually give birth to three or more babies?


That's because the immense body of
squirrel-wisdom-love is simply too big
for one little baby squirrel
to bring onto the planet by himself!

On February 17th, which was a Yellow Self-Existing Sun in the Mayan calendar, two babies were brought to me and on the next day, Red Overtone Dragon, a third baby from the same litter was found and joined us. Yellow Sun is the glyph symbolizing enlightenment and Red Dragon is all about nurturing being.  Dec. 21st 2012 will be a Yellow Self-Existing Sun and celebrates the coming of the long awaited Golden Age!

These little buddies are here to remind
us to return to innocence!
It is said that when the student is ready
the teacher appears!
Well here are my teachers!
I am so grateful for their baby squirrel wisdom~ 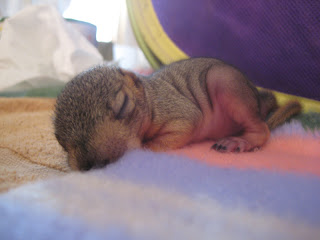 I suspect that Bucky is back in body and
has brought two friends with him!
Just when you think life can't get any better...
baby squirrels arrive!

Posted by Squirrel Lady of Town Lake at 2:04 AM 3 comments:

On the 13th of this month, 13 being a favorite number of the Mayans, my gray squirrel, Queen Earl, brought forth a message for the people of the earth.  Her highness has lived with me since she was rescued from hurricane Katrina in 2005. A New Orleans resident found her in a tree that had come down in front of his home.  He scooped up the furry orphan, put her in a shoebox, and escaped to Austin to stay with his sister.  Earl was delivered to me at 2012 Gathright.  Is she the original gray squirrel that escorted the Sun on it's first journey, across the sky in the "beginning of time" according to Mayan Legend? Listen below as she boldly speaks her truth:


The Mayans loved squirrels and to this day, squirrels are honored as hero gods. In the stele and in the beautiful drawings depicting their history, any rendering of a squirrel will show the emblem of the Sun displayed on it's head to signify it's role as the Sun's Guardian.  See the squirrel with emblem (circled in green) in the illustration below:

In the process of researching the relationship of the Mayans and the squirrels, I found this delightful animated video created by a Mayan artist...

I found it to be very synchronisitc that this video was posted by the artist on the 13th of January!  Is this a coincidence? I don't think so...  In the Mayan calendar, 13 days make a wavespell, or series of days of a specific energy. According to some Mayan scholars, "There is reason to believe that the number 13 was used as a way to say 'completion'."
So, even without a calendar, Earl the squirrel "knew" exactly when to speak... on the perfect day, the 13th!

A Yum Hunab Ku, Evam Maya E Ma Ho!
(all hail to the harmony of mind and nature)


BTW... on this day, 2-21-2012, Hindus celebrate the Shivaratri, a festival dedicated to Lord Shiva. Sadhus from Nepal and India come to the Pashupatinath Temple and join with devotees from all over the world to pray...
It's no wonder that Bucky-Sattva, inspired this post on this auspicious day! 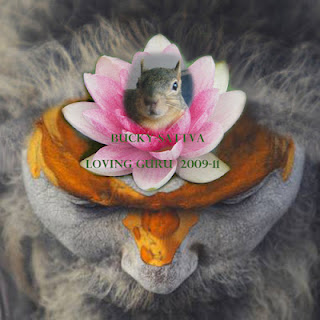 ~Om Sri Buckiji~
Just like Shiva, Bucky is a yogi who has notice of everything that happens in the world and is the squirrel aspect of life.
OM! OM! OM!

Posted by Squirrel Lady of Town Lake at 1:26 AM 2 comments: