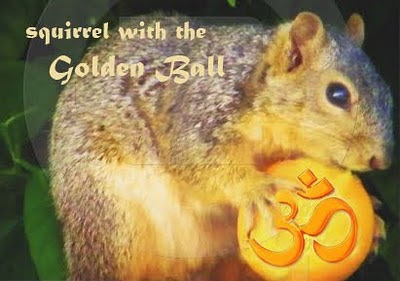 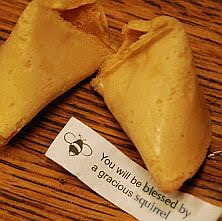 Have you noticed lately how blessed you are?
If you pay the least bit of attention to all the synchronicities that are happening, your heart will fill with gratitude! The incredible thing is that the Cosmos is giving to you constantly! And chanting is a wonderful way to tap into that expansive feeling of connection to All That Is...
It is believed that the sound vibration created by repeating the Maha Mantra gradually revives the state of pure God-consciousness aka Krishna consciousness aka Christ consciousness. This particular version of the chant (featured above) is blessed with the presence of a gracious squirrel. "Squirreliji" is the name given to the squirrel guardian of Father Sun. Since the beginning of time, the squirrel has been faithfully guarding Krishna Consciousness. That is why it is common to find symbols such as the one below. India's highest spiritual title, "paramahansa" literally means "supreme swan". The swan symbolizes the Grace of the Divine and the squirrel, it's guardian.


You know that Rama was not just a great king; he was also an avatar of Lord Vishnu. But, did you know that a little squirrel once helped Lord Rama? How? Well, here is the story:
The wicked demon king Ravana had carried away Sita, the wife of Rama, the great prince who was in exile. Along with his brother Lakshmana, Rama went in search of his wife, and enlisted the help of the Vanara king, Sugreeva. Learning that Sita was kept at Lanka, the kingdom of Ravana, which lay across the ocean, Rama, along with the Vanara army, arrived at the seashore.
To reach Lanka, they had to cross the vast ocean, and after much discussion, it was decided that a bridge would be built across the ocean. The multitudes of monkeys and bears which formed the Vanara army were asked to bring stones and boulders to the seashore, so that a bridge could be built.
Shouting with excitement, and happy at the prospect of helping Rama, who was a form of Lord Vishnu, the monkeys and bears ran around, looking for the biggest stones they could find. The Vanaras were a strong race, and they carried huge boulders, and even hills, on their shoulders easily, and dropped them in the ocean to help build the bridge.
The other animals at the seashore too wished to help Rama, and each of them helped him in his own way – the fishes and the other sea creatures did their bit by helping the boulders rest at the right place, while the birds flying overhead brought small stones to fill the gaps.
A small squirrel was seeing this huge effort, and he too wished to help. He thought for a moment, and then started collecting small pebbles lying on the shore, and dropped them in the ocean. After a while, he was too tired to even carry those pebbles, but still wanted to participate. He ran to the edge of the water, and, after rolling in the sand, ran to the water and washed himself. He ran back to the shore and rolled again, and more sand got stuck to him, since he was now wet. Again he ran to the water to wash himself. The small grains of sand which stuck to his body were all he could contribute to the massive task of building a bridge across the ocean!!
However, the small squirrel rushing to and fro on the shore was now getting in the way of the monkeys who were carrying huge boulders, and they started shouting at him, asking him to get out of the way.
“Brothers, I too want to help you. These small grains of sand are all I can throw into the ocean as my contribution to the bridge. Please do not shout at me”, said the little squirrel. The monkeys laughed out aloud, and shouted, “Of what use are these tiny grains of sand, which can scarcely be seen among the huge boulders and hills we are bringing. Get out of the way and let us do our work!”
The squirrel was unperturbed, and continued its work calmly. Finally one of the monkeys, in his anger, picked up the squirrel and flung him far away from the shore. Rama, who was watching this, caught the squirrel before it fell, and set it down carefully. He then addressed the Vanara army, “O Vanaras, you are brave and strong, and are doing a wonderful job bringing all these huge boulders and stones from far and dropping them in the ocean. But did you notice that it is the tiny pebbles and stones brought by this small squirrel and some of the other smaller creatures which are filling the small gaps left between the huge stones? Further, do you not realize that the tiny grains of sand brought by this squirrel are the ones which bind the whole structure and make it strong? Yet you scold this small creature and fling him away in anger!”
Hearing this, the Vanaras were ashamed, and bowed down their heads. Rama continued, “Always remember, however small, every task is equally important. A project can never be completed by the main people alone. They need the support of all, and however small, an effort should always be appreciated!” Rama then turned to the squirrel and said softly, “My dear squirrel, I am sorry for the hurt caused to you by my army, and thank you for the help you have rendered to me. Please go and continue your work happily.” Saying this, he gently stroked the back of the squirrel with his fingers, and three lines appeared where the Lord’s fingers had touched it. Thus did the squirrels get the 3 stripes on their backs, as a blessing from Lord Rama, to remind us that no task, however small, is unimportant! Every task should be looked upon as service to the lord, and his blessings will always be with us.
http://anustoriesforchildren.blogspot.com/2010/06/lord-rama-and-squirrel.html 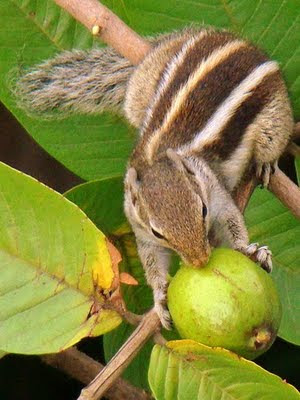 Due to this association with Lord Rama,
the Indian Palm Squirrel is
considered sacred in India!

Posted by Squirrel Lady of Town Lake at 11:52 PM No comments:

Contemplating the Life of a Squirrel Leads to Nirvana 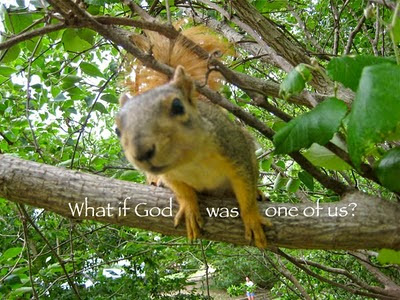 Have you ever just sat and watched a little squirrel for hours? They are the most amazing little beings... and totally enlightened! Time and time again they have shown me that they are completely at one with the Way, the Tao, the Cosmos! For example, when I would see a dog chasing a squirrel, the thought would come: "Poor little squirrel... don't let the dog catch you and hurt you!" After a lot of contemplation and observation, I've come to realize that the dog just wants to play and the squirrel just wants to play and the only one that is stressed out is me. The squirrel simply runs up a tree and starts barking. Sometimes the squirrel will even run to branches just out of reach of the dog and play with the dog. The squirrel is totally fine with whatever happens. Human beings argue with reality... animals don't. I LOVE THAT!

Think about it! We humans have thoughts like:
"Something's missing in my life" or "I need to know what my life purpose is" or "I'm having a bad day" or "I can't do it all by myself"
Do you think a squirrel ever has thoughts like these? Not a chance! They are at peace with whatever life brings and they don't sit on their branches asking questions or trying to figure things out! They just live their lives.
I have spent the last ten years really observing the habits of our fine furry tailed friends. When they bury nuts, they don't necessarily remember where they put them. Humans have projected the belief that a squirrel remembers exactly where he put every nut and most people just assume this is true. But can you actually KNOW it's true? I propose that squirrels just bury nuts for all squirrels and will sniff them out and find them. But they may not be finding the very nut they buried. They really don't have a sense of "ownership". When my two rescue squirrels, Bucky and Pete were little, Bucky would be eating a cashew and Pete would come and take it from him and start eating it. Bucky didn't mind one bit. It was as if Pete didn't even experience Bucky as a separate squirrel! Watch this video and witness Oneness! If only we humans could all get along this well!

Posted by Squirrel Lady of Town Lake at 8:27 AM No comments: 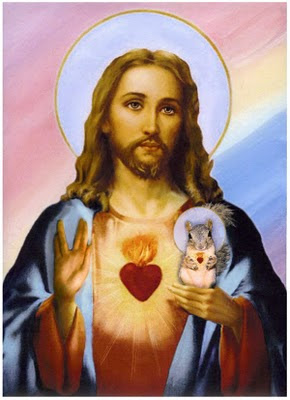 "Truly I say to you...
except ye become as little squirrels,
ye shall not enter into the kingdom of heaven."

Almost everyone has heard some version of this quote... usually the one that refers to children. But what does it mean? What is it that squirrels and little children have in common? Innocence! Pure and simple! This quote just reminds us that if we want to live in joy and well being, we need to lighten up! When was the last time you just played? Little squirrels and children have no trouble playing all day long. Mostly what happens in our culture is that as children grow up into adults, they spend less and less time playing and more and more time working. That may be good for finances, but it's not necessarily that good for experiencing the joy of just being alive! The secret of squirrels is that they do not differentiate between work and play and therefore they are always enjoying each moment... just like little children. 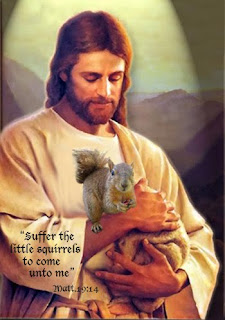 Very few people realize that Jesus was really big on squirrels. That time his disciples witnessed him walking on water, they failed to mention that there was a little squirrel right next to him on water skies. Look closely at the photo below! 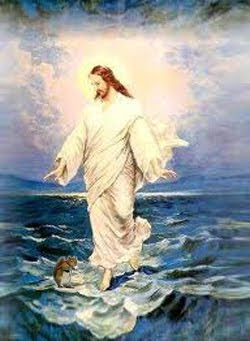 25 Shortly before dawn Jesus went out to them, walking on the lake. 26When the disciples saw him walking on the lake, they were terrified. “It’s a ghost,” they said, and cried out in fear.
27 But Jesus immediately said to them: “Take courage! It is I. Don’t be afraid.”
28 “Lord, if it’s you,” Peter replied, “tell me to come to you on the water.”
29 “Come,” he said.
Then Peter got down out of the boat, walked on the water and came toward Jesus. 30 But when he saw the wind, he was afraid and, beginning to sink, cried out, “Lord, save me!”
31 Immediately Jesus reached out his hand and caught him. “You of little faith,” he said, “why did you doubt? Even this little squirrel at my feet has more faith than you."
32 And when they climbed into the boat, the wind died down. 33 Then those who were in the boat worshiped him, saying, “Truly you are the Son of God and blessed is the little squirrel who accompanies you." 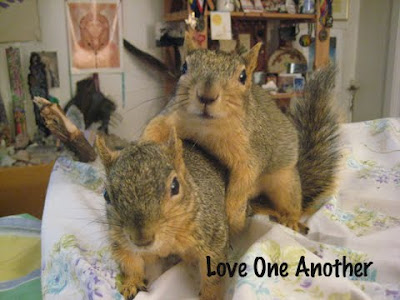 "This is my commandment, that you love one another as I have loved you." John.15:12


Posted by Squirrel Lady of Town Lake at 4:55 PM No comments: