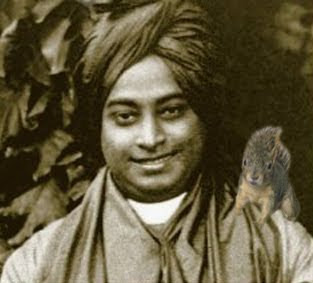 Most people are not aware of Yogananda's love for squirrels! While in California, I had the good fortune to visit Yogananda's Lake Shrine in the Pacific Palisades right outside of LA.  The beautifully manicured grounds, flowering trees, tropical plants and lake resplendent with fish and foul all exhibit the Grace of this amazing guru.  Inside the gift shop, there is a room with some of Yogananda's possessions... crystals he had collected, furniture that was his, and photos taken throughout his life.  Since I do crystal healing, I was delighted to see that he was very much into crystals!  How serendipitous! Then, as I walked over to the photo display, on particular photo jumped out at me! 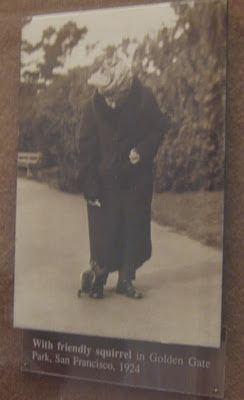 Wow! I could barely believe my eyes! How often do you see a guru with a little squirrel at his feet? And even in the gift shop there was a bronze squirrel statue on one of the shelves! I was learning more about this beautiful saint! At this time, little Bucky had not yet come into my life.

On another trip to the Lake Shrine in the spring of 2008, I attended an evening meditation. the meditation was to last three hours. After the first hour, I felt a gentle touch on my shoulder. It really felt like Yogananda put his hand on my left shoulder and was gently escorting me out of the room. I left the temple, got on the #9 bus and rode into Santa Monica. Then I had to catch the #3 bus that would bring me back to my hotel. As I took my seat on the bus stop bench, a woman there began speaking to me. I recognized her from Byron Katie's School for the Work, which we had both attended just a few days prior. She asked me if I knew anything about crystals! She proceeded to open a brown bag and showed me a quartz crystal she had just purchased. As I began speaking to her about the geometry of quartz crystals, I realized that it was Yogananda that had arranged this meeting!

Fast forward to 2010, after Bucky had his episode in the release cage and was back in the house with me. He would always climb onto my left shoulder and sit with me while I did my morning meditation and sipped my morning coffee.

After our cozy morning together, I would write in my blogs easily and effortlessly about squirrels, love, nonduality, etc. Just like Yogananda's hand, Bucky would give me direction! However, I didn't realize the connection until after Bucky's passing on Christmas Eve! After I brought this amazing squirrel home from his final visit to the vet, he lay with me all afternoon, evening, and into the night. Not knowing whether I should bury him or have him cremated, I decided to wait until he let me know what to do. I was also waiting to see when he would start to smell of decay. You see, I have buried a fair number of squirrels in the last few years, some that I have found lying in the street and others that incurred a fatal injury, physical malfunction, or those unfortunate ones I was able to snatch away from a raptor. So I know that within a certain amount of time, there will be a wasting smell.

As I sat with and loved on Bucky, the hours flew by and love enveloped me, him, and the room. Soon it was 5 am and still the only fragrance was the smell of roses at the altar! How could this be? 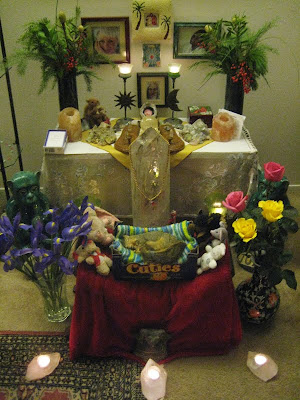 Then Yogananda's face came into my mind. I remembered back to that visit to the Lake Shrine gift shop... and all the photos of his life. There was a photo of him taken over a week after his passing and the newspaper article next to the photo announced the miracle that his body showed no signs of decay, not even after twenty days! Oh my goodness! Could Bucky be the squirrel at the feet of Yogananda in that photo taken in 1924? Again, the knowingness just came through... Bucky needed to be cremated like they do in India with the huge funeral pyres next to the Ganges! The Beatles' guru Maharishi was cremated in this way at the River Ganges: 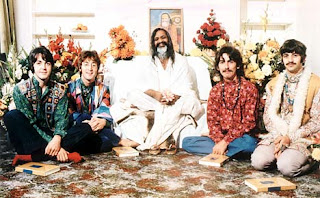 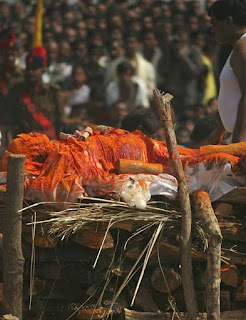 So I thought that would be the most forthright way to honor my little bodhi-squirrel. I found Superior Pet Cremation Services on Tillery St. in Austin and they were very caring in handling little Bucky. His ashes were ready the next day and the beautiful wooden box was exactly like the ones that come from India. Here you see Kali, the angel who works at Superior Memorial Services, holding Bucky's ashes: 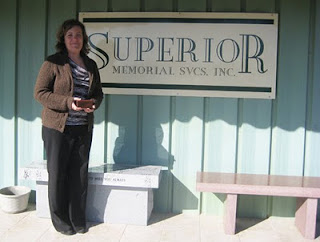 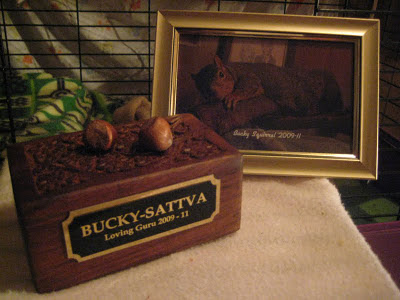 Posted by Squirrel Lady of Town Lake at 6:31 AM