Your Squirrel IS the path to Enlightenment!

Posted by Squirrel Lady of Town Lake at 2:12 PM 2 comments:

It has taken me quite a while to finally write this post.  There are no words to describe the exquisite love of and for my beloved Mr.Nut.  His story is a love story... one of miracles and magic. And so, I will begin at the very beginning.

Almost 4 years ago in mid-February of 2012, I received a call from a local vet asking me if I could take in a nest of baby squirrels.  Apparently some yahoo had knocked a nest out of a tree and put it in his shed. When his girlfriend came home, he told her about it and she immediately got it and called the vet.  (Note: this was the same vet who sent my Bucky to the light only 6 weeks prior. You can read Bucky's story here: "Farewell Beloved Bucky" )

So this woman brought me the whole nest with two little babies in it, but seemed troubled.  She said, "I just have a feeling that there is one more baby out there somewhere. I will go home and search the whole area and the shed."
So, 24 hours later, she returned to my house with one more cold, little baby. This sweet angel had been out in the cold, rainy, wet 40-degree weather.  And this was our amazing Mr.Nut!!   (Here is the post of this discovery: "Baby Squirrel Wisdom")

Bucky, Sweet Pea, and Mr.Nut grew into beautiful little boy squirrels, happy and healthy. Then as time went on, it became apparent that Mr.Nut was a little 'different' than his two brothers.  He was more quiet, gentle, pondering. In fact, sometimes he would just sit and stare... it seemed he was often meditating.  At one point Mr.Nut no longer wanted to share the same cage with his brothers and so I gave him his own space. Check out the three babies:


While his brothers were lively and played together, Mr.Nut preferred to be quiet and contemplative.  He didn't seem like a good candidate for an outside life.  So when it came time to release Bucky and Sweet Pea, I felt it prudent to keep Mr.Nut inside. My best guess was that Mr.Nut had either incurred a brain injury or birth trauma. Certainly the rough and tumble of outside life was not for him!  In May of 2012 he began to share his wisdom via a new blog called "MrNutSpeaks.com"  Soon Mr.Nut became known as the "Buddha" of the neighborhood. It was clear that he was operating in the higher realms and so began the start of his satsangs:

Sweet Mr.Nut became Commander Nut as his duties included keeping peace on the planet, helping others in need, and ministering to the broken-hearted.  He became known for his amazing compassion and peace.  Many times he would visit those in hospice or recuperating in a hospital bed. He would appear to them and comfort them at a soul level. 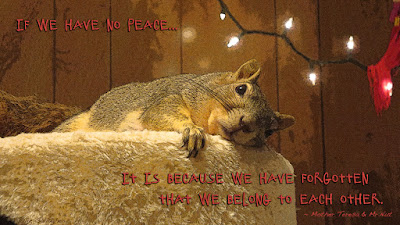 Mr.Nut always reminded us that LOVE is all.  You can see in this video taken in 2014, that he radiated pure compassion:

We celebrated all his birthdays with zeal and zest and he immensely enjoyed socializing with his many friends.
He loved celebrating Christmas and Valentine's Day.
Anyone who met him fell in love with him.  He got to meet the bakers who made his birthday cakes, his friends at the post office who helped mail his t-shirts and calendars, and he even spent time with the children at the Integrity Academy. He was intent on dispelling the old myths of fearing squirrels. He was docile and calm and let anyone and everyone pet him and love on him, always key on giving a real experience of the immensity of Squirrelove.
People came from as far away as Japan to meet him and his calendars have been mailed to almost every one of the United States and even Australia, the UK, and Sweden!
Here is the Commander enjoying his 3rd birthday celebration:

After his third birthday, the Commander seemed to slow down and gain more weight.  We tried an outdoor enclosure for him to run around and play, but after any short workout, he would sleep for hours. But no matter what was going on with him physically, he was always in good humor. Here is a video interview filmed about a year ago:

He was eating much less than all the other squirrels but his weight kept increasing. Even his vet had no clue of the cause. It wasn't until his last days that it became clear that he had been suffering from Congestive Heart Disease and that the extra weight had been due to edema. He was hiding more in his cubby and didn't like to be picked up. Finally, when I did pick him up I discovered the big sore spot on his lower abdomen... it was a sign of internal bleeding. The following day, on my 60th birthday, Mr.Nut lay in his cozy cubby while I was answering birthday wishes and phone calls. After getting off the phone with my brother from Florida, I went to check on Mr.Nut and sadly, he had quietly slipped away.  It was about 3:40. Something told me he had left his hurting body at 3:33 pm but I didn't know for sure. 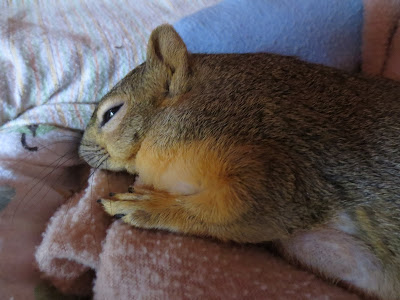 I called one of his dearest friends to tell her and she just sobbed.. she could not even speak.  The next day we held a farewell ceremony for him, placing rose petals on his beautiful squirrel body.  During the ceremony, the phone rang and it was his dear friend calling back.  She relayed her story of his passing.   She had laid down to take a nap at 3pm and suddenly sat straight up in bed, trembling. She got up and stood at the kitchen window. The clock said 3:33.  The waves of energy continued and then Mr.Nut came to her, kissed her, hugged her neck and flew off into the light.  Yes, it was true. The Commander left at 3:33, just as I had known in my heart!

How does one say goodbye to such a Beloved Buddha as this?  Perhaps the word "good-bye" is really not appropriate for this occasion.  He had touched hundreds of beings with his amazing love and compassion.  Beautiful flower arrangements arrived, sympathy cards came in, and many of his grieving friends and fans called to offer their condolences.
Now all the love that he had sent out was coming back to embrace me in this auspicious moment in time. 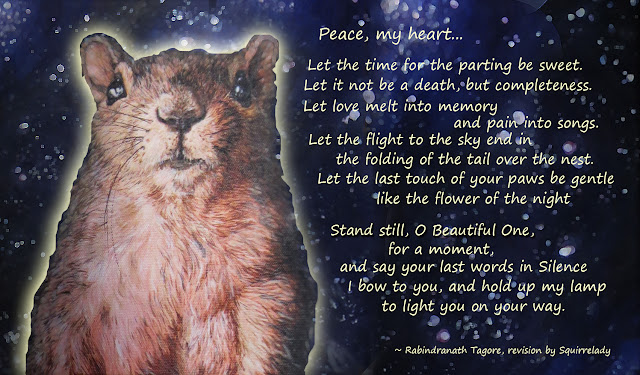 A few days after his cremation, one of his dear friends, a retired Naval Chief Petty Officer, suggested that the Commander should be promoted to Admiral.  He loved him dearly and would often send him his favorite incense from the Temple of the Great Buddha in Japan.  Then just yesterday a beautiful certificate arrived from this dear man to confirm Mr.Nut's promotion: 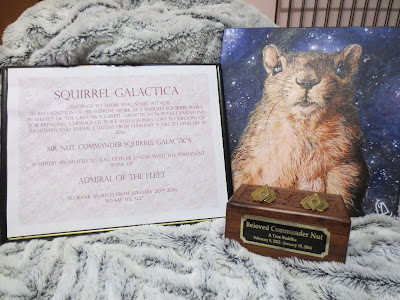 Greetings to those who shall witness:
In recognition of his supreme work as a Buddha Squirrel while in service of the Greater Squirrel Galactica on Planet Earth and for bringing a message of peace and squirrel love to millions of its human and animal citizens from
February 9, 2012 to January 19, 2016.

is hereby promoted to Flag Officer status with the permanent rank of:
ADMIRAL OF THE FLEET

Please know that Admiral Nut's mission of spreading Squirrelove continues on in all the realms and throughout the Cosmos.  Friends can still seek his counsel by using his website: SatsangWithMrNut.com
...simply go to his contact page and send in your question.

As is depicted on the cover of the 2016 Squirrels of Wisdom Calendar, the Truth is broadcast:  "Squirrelove Rules" 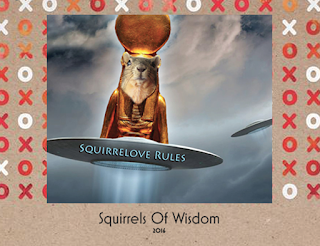 For my Beloved Mr.Nut...  I will always love you baby!
Enjoy this touching video:

Posted by Squirrel Lady of Town Lake at 12:34 PM 6 comments: