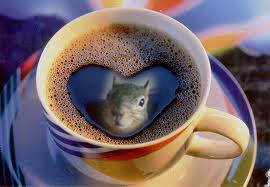 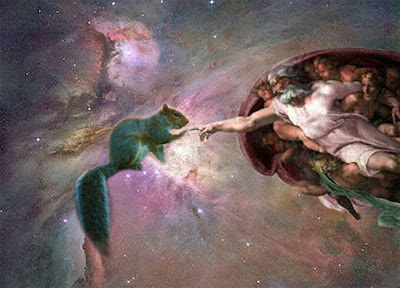 Squirrels already know this and live it.
If you've had the  privilege of living with a squirrel,
you know what I mean.
Squirrels live in oneness.
As Candice O'Denver says in Naked Intelligence:

"There is no two.  That is the importance of resting as awareness.
We refine our perception to allow for the fact that there is no two, that the reality appearance is just as it is. It doesn't need to be changed.
It's a perfectly pure appearance of awareness,
and it goes so much against everything we learned,
that it can be kind of startling sometimes to see
what we're really made of, to just allow everything to be as it is,
and not go for the bypass."

My bypass or antidote was Bucky. Every morning he would splay out on my left shoulder
as I sipped my Brazilian coffee.
I had come to really depend on this sweet "squirrel sadhana" to get into a really nice state of clarity.
However, Sri Buckyji, being the loving guru that he was, reminded me,
"If you see the buddha on the road,
kill him!" Bucky was in fact my buddha and
asked me to release him!
Now as I sit here with myself, I can speak from the
One Squirrel Heart~

There is no antidote that can bring about uncontrived compassion or bring us beyond dualistic thinking. Because in depending upon any antidote, we enter the world of "two"...  and we miss the truth:
We already are what we're looking for!
We are that love... we are compassion!
This was Bucky's message.
Don't look for another antidote.
Don't look for any curative measure!
Just let everything be as it is!
In Candice's words:

Bucky didn't see me as separate from him... and still doesn't.  It's my perception that needs to be refined to allow for the truth that there is "no two".
Whatever appears is what I'm looking for...
One Squirrel Heart! 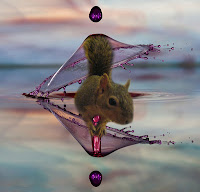 Posted by Squirrel Lady of Town Lake at 4:47 PM